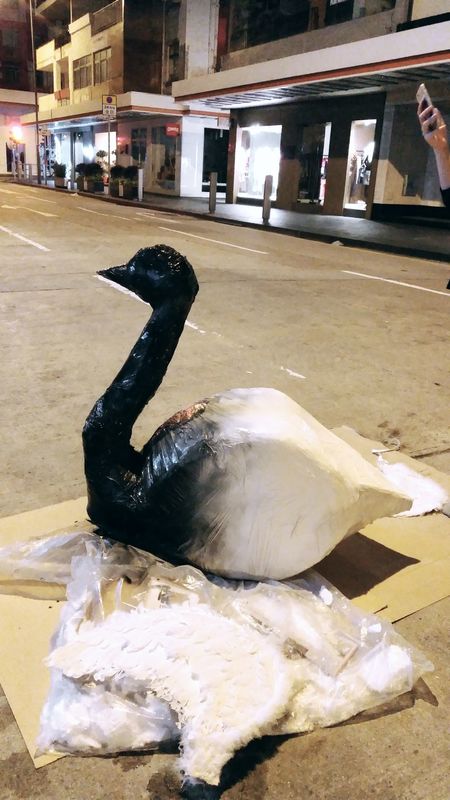 Black Swan
Pluck out your feathers
Until they bleed
Dance until you are set free
Let go when you feel your heart wanting with need -
The Dying Swan
Her beauty only skin deep
Could never keep
Her true form from the wicked night
Relentless torture swivels into her tragedy
-
Swan Queen
It was too perfect for it to last
Sweet, innocent, and majestic till death
Yearning for the Prince
Engulfed by jealousy & abhor

The swan sculpture that we have constructed is a three dimensional embodiment of the numerous ideals of transformation that we familiarised ourselves with throughout the course of the semester, and a visualization of utilizing the skills we learned in class to analyze the movie ‘Black Swan’ thoroughly. However, this piece incorporates ideas beyond the scope of the movie as well, which precisely serves as the reason why we have carefully crafted this artwork to be our capstone project.

We aimed to make explicit the concept of duality portrayed in the movie ‘Black Swan’, where the main character Nina faced the issue of two starkly contrasting characteristics. The fragile and innocent Nina, nurtured by her mother's overarching expectations, was unable to fully express herself as a sensual black swan. However, as the movie progresses, we see that this raw need Nina has to achieve perfection and approval would prove to be her demise as her obsession led to multiple hallucinations. As the weight for the strive of perfection as well as the battle of dominance between the black and white swan begin to test the limits of her sanity, we can see that the element of duality runs prominent in this movie alongside the message it is trying to convey. As a rather obvious interpretation, we used both the colours black and white, eliminating the challenge of understanding the overwhelming conflict between the two personalities.

The homogenization of these the black swan and the white into a single sculpture is a further reference to the movie, where Nina envisions herself to be stabbing her evil twin, an action committed in an attempt to regain control of the black swan. However, it was later revealed that it was herself that she had actually wounded herself. This imagery would lead to the conception of the idea that one cannot live without the other, that the removal of one is impossible without hurting the other as they are much too intertwined. We recreated this idea through a color gradient of the black merging into white, in which we are able to personify the concept that the two are melded as one. This revelation allows us to again realise that during the process of the transformation, both sides of the Swan coexists within Nina and are continually present in one body, similar to the concept of yin and yang in Chinese culture. Unlike the yin and yang, however, the black and the white swan have yet to secure the balance in which its interconnectedness would be complementary and not destructive towards the body.

The use of recycled materials to create our sculpture further portrays the sense of disorder and overwhelming chaos within the body coming together to embrace the identity of a black swan whilst still maintaining a perfect exterior as is portrayed by the white swan. We consider the process of handpicking the materials needed to create the sculpture as a transformation in itself. We first intended to use clay as the raw material, but through giving it further thought, we grew conscious of the idea that using recycled materials would be a more accurate representation of the ideas behind this project. 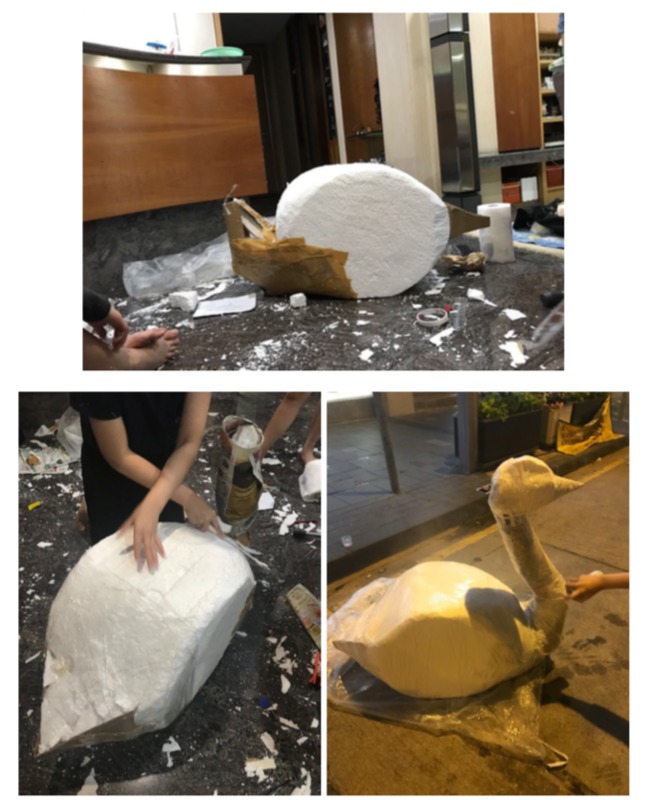 As seen from the photographs attached above, its lower body was carved into a curved shape out of pieces of styrofoam. Its tail contains styrofoam pieces as well as used cardboard boxes, while its neck and head are put together through the use of used newspapers and empty plastic bottles. The entire body is then wrapped in plastic before it is spray painted with black and white paint. The significance of overlaying the black paint starting from the top of its head spreading to the rest of its body is to symbolize that the transformation and embodiment of the black swan character was triggered by the mind. This brings another dimension to the idea that mindset is an important factor to Nina’s transformation, and mindset can be influenced by external factors such as the pressure faced by Nina from the director and her mother.

The finished sculpture has a reflective layer which serves as a cover for the intricate union of various materials within. This further illustrates the main character in the movie, where Nina maintains a respectable composure masking the psychological struggles she faces within. Only a closer glance at the swan sculpture would enable an individual to sense the imperfections, destroying the idea of a smooth surface.

In relation to the aim of this course, most people tend to focus on the before and after of a transformation, however, through this class we are taught to delve past these pretenses and look deeper into the context of the transformation and the factors or details that triggers the process of transformation itself. As such, we chose to present the swan with a color gradient to showcase the supposed ‘grey area’ which doubles as physical representation of the process of transformation. We believe that this is also where Nina struggled the most, with the darkness that embodies the Black Swan attempting to engulf her White Swan. This ‘grey area’ that is depicted by the grey gradient also shows the ethical/moral ‘grey area’ that Nina finds herself in throughout the movie as her transformation progresses, where she struggled to find which side she had wanted to succumb to and fully immerse herself in.

We chose to interpret this movie as a creative option as Nina’s struggles resonated with us as women living in a modern society. Looking from the perspective of a woman, we feel a connection to Nina’s hardships as she went through various forms of physical and psychological transformation while forced to succumb to the high standards placed on Nina by the figures of authority present in her life. Throughout this process of internal conflict, she maintains a demeanor desired by the public, the ideal ‘white swan’ who knows no flaws. This can be associated to the larger theme of societal pressure that is ever-present in this modern age - women are forced to continuously put a perfect image on display. This idea that motivates the character’s transformation can also be said to relate to the topic of transformation as a pursuit of beauty, except the strive for perfection is more emotional than physical.

This capstone project also corresponds to the pieces of artistic products we have been presented throughout the semester, as we have transformed a movie production into another form of art - a sculpture. In this course we were introduced to texts from different periods of time, all connected to the main idea of metamorphoses, consisting of various aspects. The metamorphoses being depicted above is instead manifested into a more realistic view of transformation encapsulated into one three-dimensional body. It transcends the genre of texts and can be said to be timeless, as it is not limited by language and is open to further interpretation by whoever is evaluating the artwork we have created.

We hope that our artwork can represent the course in a positive way, and can serve as an influence and inspiration for further research or entertainment purposes. We were able to further explore the course objectives through a creative outlet by expressing our interpretations through tactile means. Throughout the semester, the course had enlightened us as the assignments had not only encouraged critical thinking of different “what if” situations but had also allowed us to come into a realization of our thought processes and values.

Our group had carefully thought of the mechanics behind the structuring of the swan piece we presented. By working with recyclable materials, each and every one of us were able to contribute by inputting our own interpretation as well as ideas into the building of the skeletal structure of the sculpture. The construction process forced us to explore beyond our areas of study. We believe that the complexity that lies beneath the surface of the swan also reflects the individuality of the four of us combined.

THE DENIAL OF DENYING →
BLACK SWAN