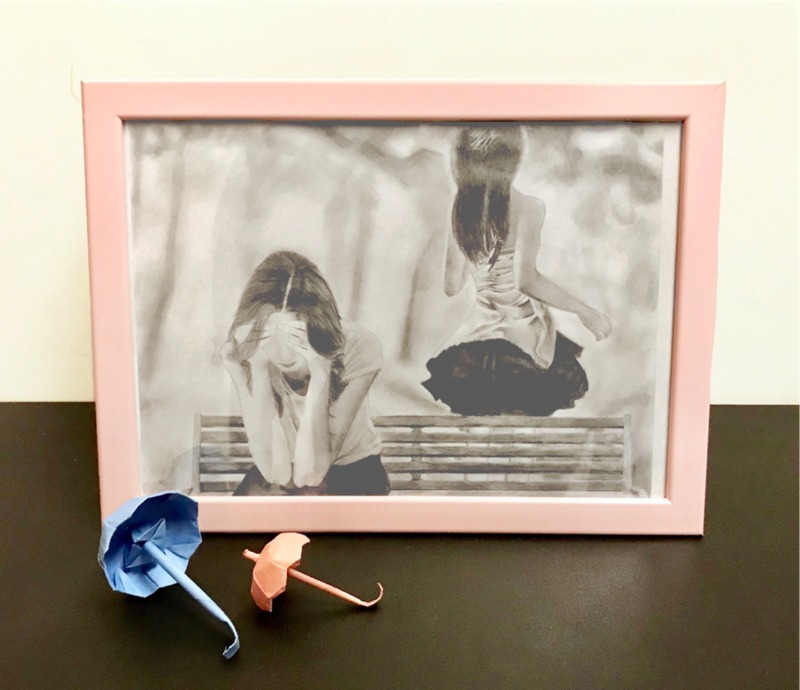 Zhang Qiongdan comes from Beijing, Mainland China, and started to learn sketching at the age of 10. Since she was 6 years old, she has been attracted by the comic of Japan Cartoonist Gosho Aoyama. In the middle school, she started to apply her sketching skill on copying characters of Aoyama’s comic work, and her sketching skill was improved during this process. She made her first attempt of sketching portrait after she attended university in 2017. She then kept on practicing, focusing on making characters as vivid as possible and injecting her own feeling and emotion into her art pieces.

It is often difficult for a person to hide his inner thoughts because his facial expressions and body languages would sell him. Through the process of depicting a person’s facial expression and action, I connected my mind with him/her, thus I can irrigate my emotion and my thought to him/her. Since in my mind, being denial is a painful process, my creation is reflecting the negative emotion, anxiety of being denied, and at the same time transmitting my positive thought as self-defense to all the people experiences denial. It is a bridge from my heart to their heart to encourage them to obtain confidence and well-being again.

My design was inspired by the real scene I saw two years ago on campus as an ambitious girl refused to continue the friendship with the girl who made no attempt to make progress. The latter one tried to save their friendship but was denied. The anxiety and depression were shown through her facial expression and action. I created this art piece to reflect the anxiety after being denied, trying to restore that sorrowful scene.

The background I choose for my art piece is maple forest instead of school, and I choose sketch as the creating approach. The reason is that I want to, to the largest extent, reflect the girl's inner bleakness and anxiety. The maple forest, two breaking-up girls, with the tone of black, white and grey, aggravate the deep atmosphere and reflect the darkness inside the girl’s heart. But the girl covers her eyes, which is a symbol of self-defense, meaning that she still has the ability to protect herself, and after going out this shadow, her future life will still be as bright as usual.