Psycho-dermatology generally refers to the treatment of skin diseases using psychological approaches. Common skin diseases include eczema, psoriasis, acne, rosacea, rash, dandruff, cellulitis, decubitus ulcers, and warts which create a worldwide public health problem. Around 2% of the global population continuously suffers from chronic skin conditions such as eczema and psoriasis. Previous research studies have shown that lifetime prevalence of eczema is approximately 20%, estimated to affects 15-30% of children and 2-10% of adult worldwide (Archer, 2013; Asher et al., 2006), and prevalence rates of psoriasis vary from 0.91% to 8.5% in different countries (Rosa, Deborah, Christopher, & Darren, 2012). The etiology of these chronic skin diseases is found to be the interplay between genetic factors and environmental factors, and a complete recovery is believed to be almost impossible.

What challenges are faced by people with skin diseases?

Most chronic skin diseases such as eczema and psoriasis are non-infectious and therefore not considered to be life-threatening. As a result, there is always a misconception that they are less serious than other illness, so their impacts and consequences on the daily life of patients can sometimes be neglected. However, research studies have shown that patients with chronic skin diseases were not only annoyed by the continuous physical pain and itch, their daily routine such as dressing, sleep pattern, bathing had also been seriously disturbed. They could experience the feeling of shame, embarrassment, anxiety or low mood, lack confidence, social stigmatization, and even social withdrawal (Miniszewska, Juczyński, Ograczyk, & Zalewska, 2013; Szramka-Pawlak, Hornowska, Walkowiak, & Zaba, 2014). Besides, they also worried about how other people see them, which would lead to avoidance of interpersonal contacts especially in public areas and might develop distorted self-image and generate guilt and hopelessness feelings (Szramka-Pawlak et al., 2014). The social life, social interactions, work related and leisure activities of patients with chronic skin diseases were also serious affected. Furthermore, chronic skin diseases were found to associate with depression and suicidal ideations (Basavaraj, Navya, & Rashmi, 2011). While physical symptoms of the patients with chronic skin diseases can be obvious, the psychological effects of chronic skin conditions have often been understated.

A defining symptom of chronic skin diseases is pruritus (itch). Chronic pruritus is known for causing sleep disturbances (Archer, 2013) and depression (Maksimović et al., 2012; Schneider et al., 2006), and the impact of chronic pruritus on quality of life is found to be comparable to that of chronic pain (Kini et al., 2011). Previous research studies have difficulties to identify the neurophysiological or molecular differences between pleasurable itch (e.g. tickling) and undesirable itch, leading some to argue that pruritus is ‘a sensory illusion created by the brain’ (Paus, Schmelz, Bíró, & Steinhoff, 2006, p. 1174) to which individuals respond differently according to context and quality of the sensation. For people with eczema or psoriasis or other dermatological conditions, chronic pruritus has a significant impact on their quality of life. 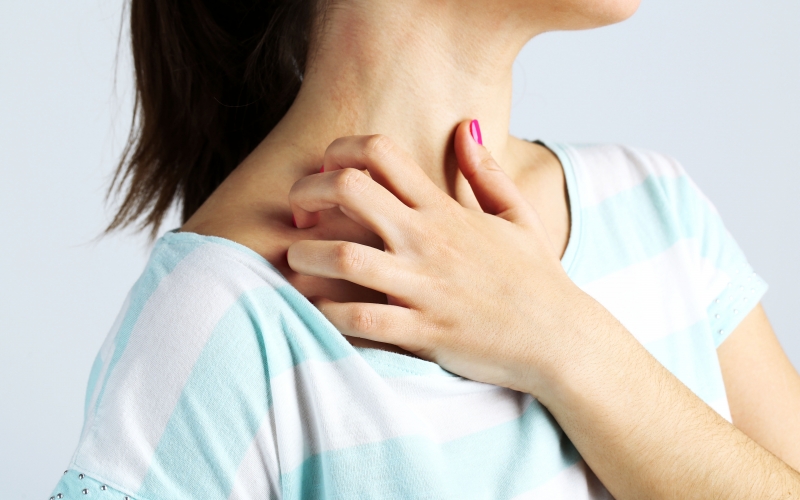 How can I-BMS  help people living with skin diseases?

Incorporating spirituality, specifically along the lines of affliction and equanimity, is potentially useful in pruritus management for two reasons. First, pruritus is a highly complex interactive process between the mind and the body for which medical intervention alone often does not bring complete relief. Spirituality addresses how individuals perceive and respond to itch, which in turn could alter the sensation itself. Second, the discussion of connectedness to self and to others, a key aspect of spirituality, is highly pertinent to patients with chronic skin disease as their disfigured appearance affects their self-identity and social well-being. Acknowledgment of the essence of affliction helps patients let go the feeling of helplessness and hopelessness, and the resentments in life. Appreciation of equanimity empowers patients in realizing the limitation of human condition and flourishing a peaceful acceptance of challenges in life. Based on previous research by Miniszewska et al. (2013) and Carrico et al. (2006), enhancing the sense of affliction and equanimity could eventually improve the quality of life of patients with chronic skin disease.

What are the findings from I-BMS projects?

In early 2015, thirty-nine adults suffering from mild to moderate levels of psoriasis have gone through a six-session, three-hour weekly intervention program based on I-BMS in Hong Kong. Physiological and psychosocial parameters including Psoriasis Area Severity Index (PASI), Illness Cognition Questionnaire (ICQ), Holistic Well-Being Scale (HWS), were measured before and after the intervention. The study has shown promising results in enhancing the psychosocial well-being of people with psoriasis. Despite the chronicity of psoriatic condition, participants still demonstrated a significant improvement in quality of life, which has recognized the value of psychosocial intervention in patient care.