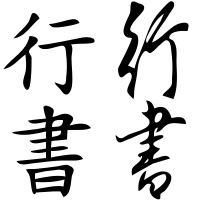 Running script is a cursive style of Chinese characters. Because it is not as abbreviated as cursive, most people who can read regular script can read running script. It is highly useful and also artistic.

Running script had already been formed in the late Eastern Han Dynasty and reached its prime in the early Jin Dynasty. Its style moderates between regular script and cursive script: it is more free-flowing than the orderly regular script while more easily recognized than the spontaneous cursive script. It was thus widely used. Although running script runs in unrestrained manner, excelling in the writing of this script was not easy. Good practice of regular script is a pre-requisite for fine writing in running script. It comprises of the use of portly brushes and the dots and lines are bulging, comparable to iron wrapped in cotton; the use of ink is strong; the centre of the combination of the structure is closely knit while the upper right angle is relaxing.