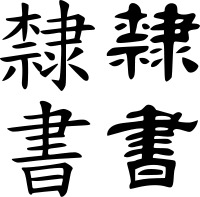 The clerical script is an archaic style of Chinese calligraphy which evolved from the Warring States period to the Qin dynasty, was a dominant script in the Han dynasty, and remained in use through the Wei-Jin periods.

Due to its high legibility to modern readers, it is still used for artistic flavour in a variety of functional applications such as headlines, signboards, and advertisements. This legibility stems from the highly rectilinear structure, a feature shared with modern regular script. In structure and rectilinearity, it is generally similar to the modern script; however, in contrast with the tall to square modern script, it tends to be square to wide, and often has a pronounced, wavelike flaring of isolated major strokes, especially a dominant rightward or downward diagonal stroke.